I thought it was a nightingale, but why should I be disappointed if all that forlorn threnody was only a robin, afraid the night might never end.
Posted by Ossian at 4:06 pm 1 comment:

Email ThisBlogThis!Share to TwitterShare to FacebookShare to Pinterest
Labels: audio 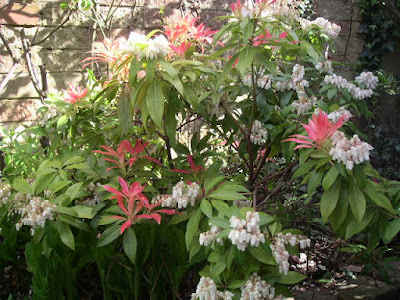 Pieris "Forest Flame" is just past its best now, starting to go to seed already (if I look closely). I've been meaning to try and snap it. This is one of three in my front garden that came from Inverary about ten years ago. The others are a bit bigger than this one, but harder to photograph. Forest Flame is a beautiful evergreen and apart from the profusion of pendulous white flowers, new foliage emerges bright red - hence the name.

Went to the barbers this afternoon, braving scarification by a mad Kosovan whose traditional haircare seems to involve repeated blows to the scalp with the prongs of a steel comb. He wasn't there today, thank Allah, and instead there was a very nice, strapping lass in his place.

You never know what you're going to get when you go into a barbershop in London. The last place I tried had a soundtrack of dreary chanting by an Arabic male voice choir, and a constant stream of fit young Arab blokes passing through - "Salam Aleichem" "Aleichem Salam" - chatter, chatter, and away again. They slapped hair oil on my hair without asking and I came out looking like Lon Chaney (senior).

Down on the High Street, I am struck by the beauty of water standing by the kerb, and the bright glow around the edges of dark clouds at the end of the high street. It ought to be enough to live these things, and not have to tell the world, but there is some urge to share, to tell people and have them say, I know - and did you see? So much waste...

Or profusion, I suppose. These wallflowers are growing wild in the front garden too, with some other purple flower underneath (violets?) 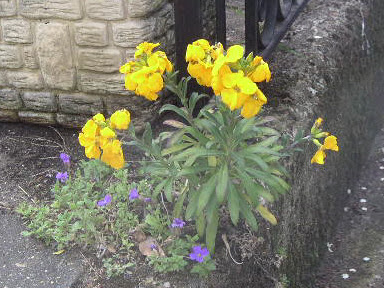 Posted by Ossian at 8:08 pm No comments:

Went to see Bloody Sunday: Scenes from the Saville Inquiry at the Tricycle Theatre tonight. A documentary not a drama, it's edited from the inquiry proceedings by Richard Norton-Taylor. One has to trust his selection of scenes from such a long transcript to give a fair impression, and it felt about right. The acting was excellent, especially Sorcha Cusack as Bernadette McAliskey, and the whole cast as well, not a dropped stitch anywhere.

Walking back to Willesden Lane, an apparition! We stopped to watch the sashaying of a belly dancer through the half-darkened window of El Andsaloasse Moroccan restaurant. I dream of Jeannie.
Posted by Ossian at 12:29 am No comments: