Not notes notes, just notes. On yet another note, I do wish the adjoining farm would take up lavender growing or anything other than cattle, if you catch my drift.
Posted by Ossian at 7:46 pm No comments:

Email ThisBlogThis!Share to TwitterShare to FacebookShare to Pinterest
Labels: events

Inside the walled garden 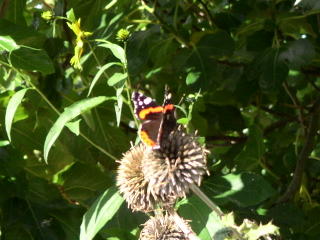 Charleston is a literary and artistic Ali Baba's cave. If you go to the Small Wonder short story festival there, it's worth going early and taking a tour of the house. Virginia Wolfe lived there for a while with her sister Vanessa, before filling her pockets with stones and wading into the river Ouze. The rooms of the house are covered in paintings, fragile murals, decorations - every inch had to be beautiful. There's a sculpture of the head of a boy, a gift from Renoir, as well as many rare and wonderful paintings. The tales of tortuous relationships would put any fiction to shame. I'm reading more about it in "Deceived by Kindness" by Angelica Garnett, which I picked up in the shop there on the recommendation of one of the marvelously enthusiastic and knowledgeable tour guides. The house is restored and preserved by the Charleston Trust. T. S. Eliot read from his manuscript of The Waste Land for the first time ever in the sitting room there, and somebody fell asleep during the reading. Another speaker said that somebody had fallen asleep while Maynard Keynes read something, which sounds slightly more plausible. Whatever. There are lots of funny and amazing stories like that, and a lot of sad stories too about the place. I spent a sunny morning in the walled garden, working on a short story, on a bench with nobody else around, just fruit trees, flowers, bees, and statues. A party of schoolchildren passed through later. 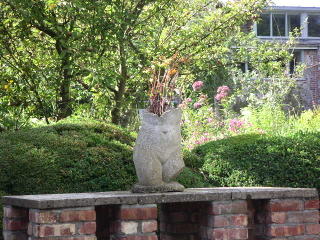 Posted by Ossian at 4:54 pm No comments:

My parents are from the tenements of Dublin, and so am I, though we moved out to a Corporation house in Finglas when I was about eight. Later in the 1960's the tenements started to collapse after some dry summers, and they were cleared, and the residents relocated to Ballymun, which itself is now being demolished.

My mother and father were members of an Amateur dramatic society in Dublin. They also had a passing acquaintance with the Behan brothers. On the day of my parents' wedding in 1953 the reception was in a local pub, and Dominic (or was it Brian?) and Brendan Behan were there. My mother remembers the brother as nice and presentable, she didn't mind him. However, she didn't have much to do with Brendan, who came in later. She described him as a "foul-mouthed chap in a coat tied with a string."

Brendan Behan - Wikipedia, the free encyclopedia: "By far the most famous Irish writer of his time he was once hired to write an advertising slogan for Guinness. As part of his payment for this the company offered him half a dozen kegs of their stout. After a month the company asked Behan what he had come up with, Behan had already managed to drink all of the beer they had given him and produced the famous slogan Guinness makes you drunk." (Wikipedia)
Posted by Ossian at 1:16 pm No comments: