My Dad died last night in the Mater hospital, Dublin. He was born in Dublin (Rotunda) on December 1st, 1933. He was a member of the Young Socialists and later secretary of the Irish Labour party Ballymun branch. His working life was spent in "the rag trade" where he was a cutter and later general manager of a small factory in Leitrim. In that role he combined selling to department stores, such as Arnotts and also Marks and Spencer. In his last years he was chairman of the Ballymun Mens' Centre, an educational and social project to which he was very committed. The following is a copy of a message posted on 21/7/2006. 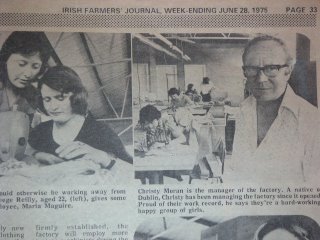 Christy Moran, in his prime...

The picture was taken when Dad was General Manager of a shirt factory in Leitrim. It's from a two-page spread in the Irish Farmers' Journal about the factory, which was owned by locally famous business tycoons, the McCartin brothers, one of whom was and is still a prominent politician. The brothers' homespun technique for wealth creation (which ultimately ended in bankruptcy) was the way they had been taught to pick fruit, to take one tree at a time and pick it clean. They bought farms, milled and produced feed to supply to the farms, provided engineering etc. After creating hundreds of jobs for men, the McCartin's setup the shirt factory to provide work for local young women who might otherwise have had to leave the area.

My Dad, Mam and my sisters (I have no brothers) all worked in the rag trade, and so did I for the first six years of my working life. (Imagine our delight the year Rag Trade won the Grand National! That Saturday in 1976 I was working overtime in a factory in Smithfield, Dublin when everybody took a break to watch the race in a pub around the corner. A great day—but that's another story.)

Dad was at a garden party this week in Áras an Uachtaráin, as chairman of Ballymun Men's Centre (BMC). In spite of an inauspicious address (Lift Shaft 4, Shangan Road) the BMC is a great facility, a warren of rooms with a computer network for training, meeting room, office etc, though scheduled for demolition together with the rest of Ballymun.

Amongst many other things, Dad was formerly Secretary of our local Labour party branch. He resigned when they decided to go into coalition with Fine Gael (many years ago.)

One of his favourite books is The Ragged Trousered Philanthropists, and he is as genuine Dublin as you can get. He has a highly developed sense of the ridiculous, which I'm glad I inherited, and no time for pretentious tomfoolery. Here he is in the Ballymun Men's Centre, trying to keep a straight face while pretending to point at something for my camera. 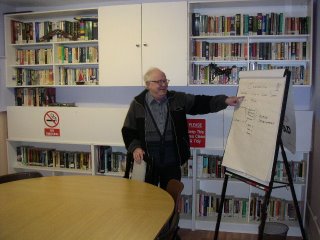 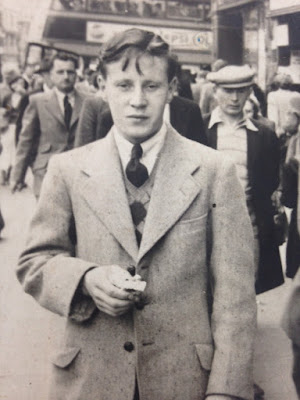