So many memories
There's nothing left to gain from remembering
Faces and worlds no one else will ever know
...You are my sister, and I love you.
Posted by Ossian at 5:06 pm 1 comment: 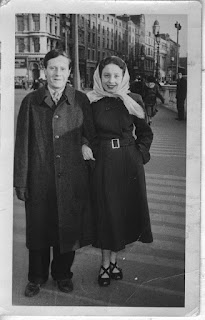 Dad and Mam in Dublin (O'Connell Bridge, 1952-4?) caught by a street photographer, one of those who used to give you a ticket to get the photo later.
Posted by Ossian at 1:40 pm 1 comment:

I wanted to write something about Lewisham, where I was last Thursday evening. It was raining and just still light, with the street market closing. I love the half light - and rain, and rivers. There's a river called the Quaggy that runs through Lewisham. It used to be called the Lee Bourn, according to an information plaque. I was a bit tired - hadn't slept since Tuesday night - and didn't feel like taking pictures but everything was ravishing, especially the tables covered in bunches of bright yellow bananas put out in front of market stalls for workers going home, and more ranks of darker things further back, as the vendors were packing up. I really didn't want to go anywhere, and if not for convention I would have stayed there gazing around (and maybe slept in a doorway - no not likely) but I had to move on.

The trees along the banks of the Quaggy are infested with plastic shopping bags, by the way. If one-use plastic bags are banned, as seems likely, places can be cleaned up and it will be well worthwhile. It has been in Ireland.

* Blossom Dearie
Posted by Ossian at 5:55 pm No comments: 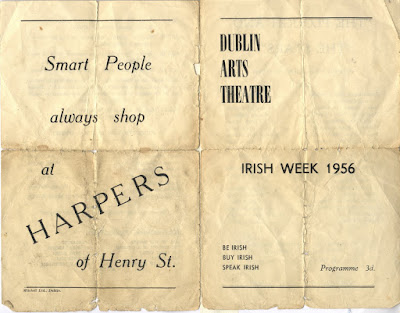 Dublin Arts Theatre program 1956, The Plough and the Stars 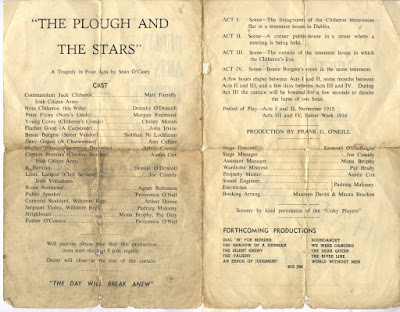 Dad's name is there, Christy Moran as Young Covey. I remember Matt Farrelly, an old friend of Dad's. He let me pretend to drive his VW when I was a small boy, and he and Dad took me to see Shamrock Rovers.
Posted by Ossian at 6:33 pm 4 comments: