This is where science is somewhat deficient, in my admittedly not expert opinion. The "feeling" about our current impression of what life is is wrong and must be comparable to the "feeling" about let's say then current impressions about heredity, geology, geography etc at various times in the past. We now need a new Darwin, a new Einstein to open our eyes about life itself.

I know that the scientific take on this extends from microbes that live in rocks to other dubious and many obvious examples and there are borderline entities as well as concepts for cloudy technology-based entities that could be considered to have life. I'm not referring to borderline or artificial concepts, what I'm thinking about is the main ubiquitous animal life that "we know very well".

What makes a cell divide repeatedly and eventually fill out a model that becomes a creature and what makes these creatures spark (almost literally, electrical impulses spark the heartbeat) or grow and reproduce? Surely there isn't enough coding potential in DNA to model even a cell itself, let alone all the organs and dynamic behaviour, instincts built in, and the brain itself etc etc.

There are more lines in a not-particularly-complicated computer program [the machine code] than there are in the human genome. So where is the real pattern for life? We can put a pile of amino acids in a saucer but they won't get up and write À la recherche du temps perdu. Estimates vary from 25,000 to 80,000 effective genes in the human genome, and currently thought to be at the lower end of that range (ref: here). There are more parts in the body than there are elements in the genome! [Can't find an anatomical dictionary count, but an online medical dictionary boasts 82,000 entries, including 63,000 definitions.] Imagine what it would need to program any one part of the body, never mind the brain, for example. You couldn't program even a wonky robot with that number of instructions, let alone a system to build a wonky robot (which, some might jokingly argue, is what we have).

Ok, let's make a hypothesis that DNA is only a list of variations, similar to the measurements and colour list for bespoke suit, say. The tailor knows how to make that variation of a suit, so that you get a distinctive looking suit, perhaps floridly exotic-looking, large or small sizes in each component etc. But that list of measurements, colours, even drawings, is nowhere near able of itself - the pattern - to make itself. It is only a pattern or design. Even placed together with the material needed, nothing will happen. In practice we go into a tailors, get measured, select a colour, fabric and style, have it all written down and we go away and come back and the thing has been made to the specification. So that is the hypothesis, that DNA is a set of variations to something that will be made.

Maybe you might say that a car is very complicated, but the design for a car can be 100% encoded, in such a way that a robot and a computer could make the whole thing from the design and out of a factory would come a car ready to drive. We know that a human being is far more complicated than a car, so what I ask is this: can you encode the design even for a car using nothing but the coding ability of DNA and no more than the amount of DNA, with its number of genes, in a single human cell? If you find that it is impossible to encode the structure of a car using the coding potential of the four-letter DNA sequences, albeit in an analogous, mathematical estimation only, then how could it possibly encode a human being?

This is a challenge: Prove that the design for a car could be encoded using the number of units of 4-letter permutations that human DNA contains.

I want to speculate about the implications, should this challenge not be achievable, i.e. should it be the case that DNA is inadequate to encode a complete model of a human being. Let's simplify and say a complete model of a worm, imporantly this model is not just a physical model of the structure of a worm, it has to include all the behaviour, instincts, mobility, regeneratability, reproduction etc.

If (IF) DNA is inadaquate it follows that there must be something else that causes human beings and other life forms to fill out their "models" and "behave" characteristically (instincts etc.) This is not to say that it is something mystical, though it might as well be - because in effect everything we not only cannot understand but deem incapable of comprehension is mystical, almost by definition.

To be continued.
Posted by Ossian at 7:27 pm 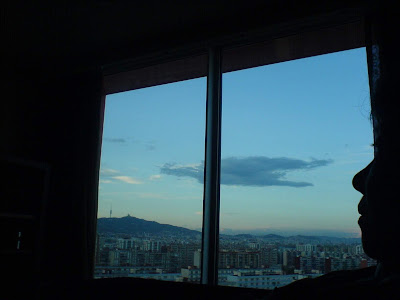 Taken in a hotel room in Barcelona a couple of weeks ago
Posted by Ossian at 12:12 am No comments: