I'll be there supporting this with Willesden Green Writers' Group, on Friday at 8 pm, reading a bit of one of my stories that touches on immigration. It's a self-contained part of "The End", which is the first story in All Those Endearing Young Charms. (And yes - before you ask - the last story is called "The Beginning").
Posted by Ossian at 6:11 pm No comments:

Email ThisBlogThis!Share to TwitterShare to FacebookShare to Pinterest
Labels: editing 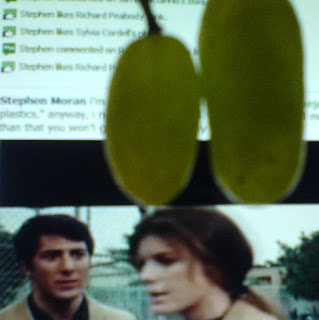 Posted by Ossian at 5:00 am No comments:

I didn't know the bike was there

I am standing beside a road which is empty on this side but on the other side there is a line of cars facing this way, waiting in a jam. Suddenly a very small but high-powered black car darts out and speeds past the stationary traffic on the wrong side of the road. This is very dangerous. I turn around as it passes me by and see it speed across a junction, still on the wrong side, and straight into a cyclist coming the other way. The car has stopped on top of the now invisible bike. I think I must phone 999 and call an ambulance. As well as horror at what has just happened, there is a small feeling of righteousness about being the one to call the emergency services. I think to myself that before I turned around and saw it, that bike must already have been there. It was moving as slowly as the car was fast, peacefully making its way in the middle of its own lane. Yet before I turned round, I had no idea the bike was there.
Posted by Ossian at 3:30 pm

How not to think

"thinking is unnecessary. just work, eat, drink, sleep, excrete, repeat, not necessarily in that order. all thought is redundant because it cannot be but what blather o reilly to horse me charger killiraggert snortdorgel"

we know before we think. it has been proven experimentally anyway, but just (er) think about it. there is no need for the time-consuming thought. all can be at light speed as long as we don't think. this is the reason for beginner's luck, for example. as soon as they interpose the delayed and faulty thought, having "learned" how to play, players lose their beginner's luck. it is a one-time only gift. usually.

whatever you think you thought, you already thought before you thought you thought. how can it be otherwise. if i can stop thinking i can fly at light speed through where thought plods and get outside the earth's gravitation (so to speak, and speaking is even more redundant, especially on the internet where we are all trees falling in forests with nobody around except other trees who are falling themselves and so do not make good listeners.

(anyway listening is pointless as well. you cannot listen to what you have not already heard. listening is a form of thinking and so should be eliminated. (but elimination of thought and listening is pointless, because nature eliminates them by making them pointless and redundant, in other words they are self-eliminating. therefore to try and eliminate them is itself further redundancy piled on the initial redundancy. (whether you think or not is immaterial. (so you thought? so what? i thought and that was a nanosecond i'll never see again.

(but seeing - now that's a waste of pixels (which are themselves dismal ineffectual redundant representations of entities that preexisted the pixels (entities like trees that do not waste their time thinking (feverish thinking (a disease of the mind (before thought was the same animal, the bald ape (adam and eve, like laurel and hardy, "two heads without a single thought".

it's just a hop across a slippery stepping stone to genesis and adam and eve eating from the tree of knowledge, which is where all our troubles supposedly originated, otherwise we'd have been coasting along on beginners' luck, millions (billions) of us fololoping around in pristine ignorance, always landing the rolled up scroll in the waste paper bin first time and having comprehended the universe just by or at the same time as opening our eyes.
Posted by Ossian at 10:32 am