Duplicity and hypocrisy of the British establishment

Popular British media is counter-educational and devoid of dignity, purposefully designed to patronise, degrade and demoralise the general public. It is a smokescreen to obfuscate and so protect inherited privilege by debilitating the general public.

At the same time continual wars are fostered to further weaken and cull the healthy progeny of the serving classes, providing more distraction and rewarding the people's self-destruction with mealy-mouthed, cost-free acclaim and carefully forgetful "remembrance".

What about a tomb for the Unknown Citizen? Where is the ceremony of remembrance for the countless millions killed by order of British governments, whose leaders place wreaths and go back to their offices to order more bombing?

The other is relentlessly patronising and meretricious, Blue Peter for all ages, moronic games, tone deaf singers, clodhopping wallopers, cheesy fops, blowsy, raucous tarts and all presented by smarmy, unconvincing phonies and deadbeats. Twenty year runs for unfunny situation comedies that died in their first season.

Other channels: With a few honourable exceptions, UK commercial television is a desert of the utterly banal and nauseating.

Newspapers: The main tabloid newspapers are nothing but a sick joke. The London Evening Standard at least has Brian Sewell, a really great columnist, and affords him two or three pages when he reviews an exhibition.

I think the Guardian is superb, a world class newspaper here, no? The Independent at least tries. The Times seems dreary and overblown but I haven't read enough to say for sure. They support the short story by running one in their Sunday supplement. The Telegraph is sensationalist, with weak science stories overplayed, sour and boorish columnists (the brilliant Boris excepted) but at least got the scoop on MP's expenses and interesting if you want to know what your enemies are thinking.

These are my impressions anyway. No doubt I'm in the throes of some florid delusion.
Posted by Ossian at 8:21 pm No comments: 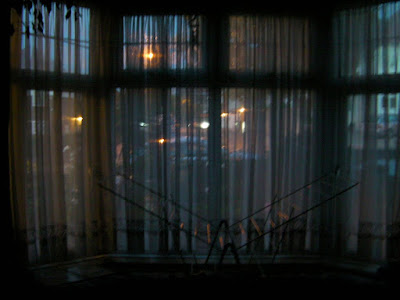 You know when you're on your own in the middle of a room and you look through the window at lighting up time and wonder how many are being born, making love, dying, how many are standing looking, how many sleeping... (and a lot of other tiresome, mundane or horrible things).
Posted by Ossian at 7:30 pm No comments: