We cannot trap these governing points because they are evanescent and distant. Before we know about them they have already gone. We can't know them before they occur, can't know them at the same time they occur unless even if they are part of our own internal world, only after they have already occurred. Each container can hold within it innumerable transient events and each person as a container of thoughts has access to authoritative sources. The box knows what happened to Schrodinger's cat.

From where A stands, B looks one inch tall. From where B stands, A looks one inch tall. They are both sixty inches tall and N metres apart. A is right about himself and wrong about B. B is right about himself and wrong about A. Rightness is inherent in the entity itself. Each entity is its own truth but no other can know it exactly. That doesn't mean there is no truth, only that it's hard to know.

That takes care of what is outside. What is inside an entity is carried there blind and impervious to what's outside. The mind, being inside of one, is in its own world, the world of oneself. However, the mind has windows onto the outside, in the form of eyesight, hearing etc. We apply our minds to understanding what is outside and calculating what the truth might be.

It is a mistake to say that each viewpoint is equally valid, the prime example being whether A and B are dead or alive. It makes no difference what A thinks about B being dead or alive [or rather it doesn't help us know what is true]. It only matters whether B as B is dead or alive. B is the absolute authority on whether he is dead or alive. No relative impression has any authority. B owns the attribute "dead or alive". That is a governing point.

Governing points are start points and the world is continually emergent in the form of new governing points. All else relating to a point is governed by the point. It is instantaneous and transient. The traces it leaves are like ripples after a pebble falls in a pond, except that the pebble vanishes in no time. One nanosecond after the pebble strikes, it is a different pebble that continues to make its way through the surface of the water. We can hypothesize that like points in geometry, controlling points are infinitesimally small. We might call them events, except that the everyday sense of the word "event" creates a misleading impression. So I will call them points.

The world consists of continually emergent infinitesimal points, each of which is the authority on itself. The point governs its own existence. No entity can make any observation or conclusion about a point, until the point emerges. Because its existence is infinitesimally small, it is gone before any entity can exert any control over it. A point has power, it is authoritative and conclusive. But when it comes to knowing about governing points, we are all at sea. Truth is a moving target.

Posted by Ossian at 9:48 am No comments: 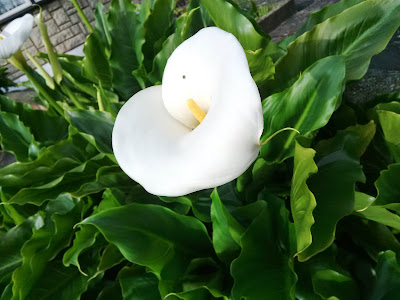 I'm very pleased that Staxtes magazine has published Winter Thoughts as part of its English Wednesdays series online, with a marvellous picture by Stratos.
Posted by Ossian at 12:49 am No comments: