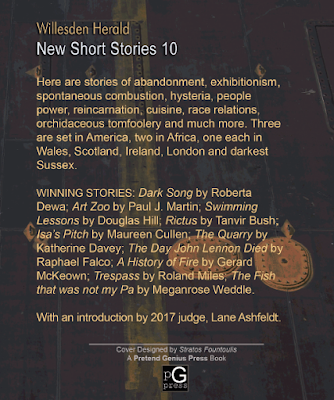 I have just sent a newsletter to our 1762 subscribers, with the cover reveal, biographies, publication details etc for Willesden Herald: New Short Stories 10 and other news. Link to view online: Newsletter.

Many thanks to Stratos Fountoulis for the cover design and once again to Lane Ashfeldt, to Liars’ League for continuing support over the years, and to the much-missed Willesden Green Writers’ Group, who helped keep this competition going through hell & high water. And all writers everywhere, here’s to you!

Posted by Ossian at 3:34 pm No comments: 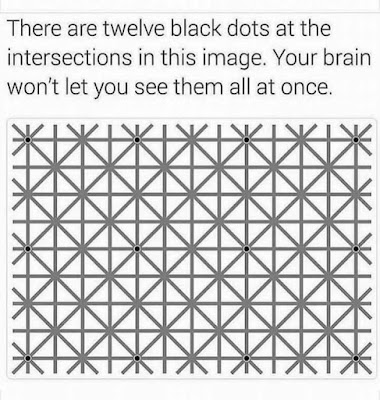 This must surely be what happens when picking blackberries. You see the best ones first, then after you take those, others appear "out of nowhere". There are spots at all the junctions in the image but "your brain won't let you see them all at once". This could be an advantage when many other hands are competing for the best fruit, allowing you to home in on one you've identified.

Other ideas I've had about evolutionary traits. I don't know if they are common knowledge anyway:

Into the rainy night

Back with the B.....s again. This time I did meet E.... but also the others and even B......., whom, ostensibly I was there to see. In fact he left me alone for a while and who should come in only E-, and we got talking. She wanted to make some point, to harp on about abortion, and there it was, the same old religious incompatibility. It soon became clear that I had to go. It was raining hard outside, but while dressing I couldn't find the coat I came in with. I was looking for it - they have so many clothes strewn around - and eventually took something I'm not even sure was mine, which was only a vest, I think. After that fuss, I thought better of trying to find a box of chocolates that B- had given me earlier, which I had since lost sight of. It might seem selfish to ask after it, and there was still no sign of B-. As I was leaving, going out into the rain, ill-clothed and with a long walk ahead, most of the family, though not B-, was there in the hallway to see me off. Even the reverend himself - tall, smiling, happy. I couldn't really say anything, not about what had transpired, neither the missing box of chocolates, my difficulty with clothes nor the unwanted topic with E-, on my way out the door.
Posted by Ossian at 11:04 am No comments:

I carry someone back to the flats. The shrilling of evil is all around. One kind friend guides me by, towards the entrance. Another cheerfully leads the way. She has only a clean robotic mechanism exposed across the shoulders and nothing above. But the dreadful shrilling of evil is all-pervasive.
Posted by Ossian at 10:32 am No comments:

I shat myself, I pissed the bed,
I thought this & that, I lost my head,
I loved three or two or one.
That's the autobiography done.

* Outtakes from Spoon River Anthology
Posted by Ossian at 7:11 pm No comments:

In the night town, it is pitch dark. An endless column of people stand in the road, each row of women followed by a row of men. As one, each of the men pins a little padlock brooch to the side of the waist of the woman in front, quickly and easily. I try to pin mine to your waist but tear your dress a little, and so it fails. It's late. Now the last few from the crowd are dispersing and I'm in an empty car park above the park gates, but I can't find you. There is a steep, grassy hill which will be a shortcut down to the railings and the main gate, where I can almost catch up with the crowd. I edge down the narrow beaten track. But halfway, I think I will lose you completely this way, so I go back up to the car park. I think about taxis, but there aren't any at this hour. It occurs to me that I might contact you by phone. At first I try my smart phone. It has a wonderful but incomprehensible display of clockwork wheels and cogs, and I don't know how to work it. Then I try a tiny phone but it's dead. Walking home from town, out of the corner of my eye, a dark figure flits by on the other side. I make my way to some small, unfamiliar Dublin streets, where I'm not sure if there's anyone around.
Posted by Ossian at 10:12 am No comments:


The alien invasion has begun.
Posted by Ossian at 10:27 pm No comments:

Dancing is an eco-friendly
way of burning emotions
in the form of joy.
Nuclear fusion occurs when
two people lean together.
There's a burst of heat
energy, and it's renewable.
Transform your misery
into happiness, and that
is alchemy indeed.
Posted by Ossian at 12:58 pm No comments:

This is something I wrote when I was supposed to be writing something else, recently. And before you tell me, I know The Observer is a Sunday paper.
Posted by Ossian at 3:33 pm No comments:

Email ThisBlogThis!Share to TwitterShare to FacebookShare to Pinterest
Labels: publications

It's always in a crowded place, last time a concert, this time a meeting. I am always a little late arriving. When I get to you, I lean my face against yours, so you can tell me something in my ear. I notice you have blotchy skin, and are quite thin. You tell me something, but I can't make out the words.
Posted by Ossian at 3:26 pm No comments:

I am anxious about my habit of always going naked at gatherings. I went to a small coffee shop to see the star. When I have taken off all my clothes, the place fills up. It's only a small shop. Soon we hear the sound of the star playing and singing, as Donovan appears. He hasn't changed much, a short guy. Everyone in the crowd is encouraged to get up and have their pictures taken. I feel a bit embarrassed. Where did I leave my clothes? They are strewn over two chairs. I put on underpants. "I'm an old hippie," I say.
Posted by Ossian at 3:15 pm No comments: