Up in the office block. Briefcase? To the top floor to get something that's mine, while the boss is not around. Was that a sound, is he here? To get away, go out and back to the past.

The woman in a big dress tags along with the others. I wish she wouldn't. At last she has drifted away, I can see her float down the landings. This building is mostly glass.

There's nobody else on the stairs or in the corridors in this block. I wonder if there is anyone inside behind some of the doors, as we reach the end of the corridor where my apartment is. The others are still just behind.

The apartment is modern, spacious, open plan, minimal. There is a small saucepan sizzling on the electric hob. Further on in, another identical little saucepan, steaming, boiling. And there's another one ahead on the next worktop too.

I realise that no one else I know is here, no one else can be here, because this is the past and they've all gone. Everyone else is in the future.

But the ones who tagged along came into the apartment behind me. I point at them. My speech is feeble, so I strain to raise it, but it's rough and fluctuates. I say, "You are in the twilight zone."
Posted by Ossian at 4:32 pm No comments: 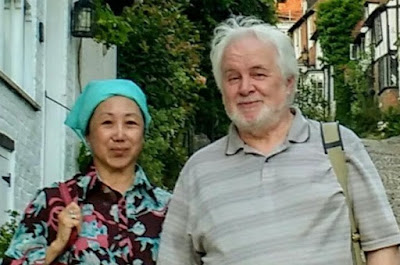 By a kind of logic that says if you post pictures of other people, you must post pictures of yourself, I give you me and my better half in Rye a couple of weeks ago. Thanks to the kindness of strangers who take photos for people on their own phones, and to the photographer lady who made such a good job of this one.

By the way, someone told us that Mermaid Street in Rye, where we're standing, is the most photographed street in England, for touristic purposes. (No doubt, someone will contest that.)

We stayed at the Mermaid Inn, up that hill, a building that dates back to the 14th century and is built on top of cellars that date back to the eleventh century. You can ask to be shown the cellars, used for wine of course. They're a little bit spooky, dungeon-like. Rye was rebuilt in the late 14th century, after being burned to the ground by a French raiding party. The inn is a fascinating place, not least to think that Shakespeare's company may have performed or sojourned there. It's also like a fairground "crooked house", because everything leans every which way.
Posted by Ossian at 4:37 pm No comments: