Re-reading my book after 15 years

After my book "The London Silence" was published, I grew to hate the text. About 120 were sold but I decided it had to die. I wanted to change the ending to a one-page "Coda" and resolve the dramatic irony more satisfactorily. I told PG to remove it from sale. So it's out-of-print even p.o.d.


I buried my stash of copies in a recycling bin, so it became pulp fiction. However, secondhand copies could still be bought on Amazon. Just recently, I thought, "I'll buy all of those and bin them too" but it's not possible as some are priced at outrageous levels. However, a strange thing happened next.

For the first time in nearly 15 years, I started re-reading the text and it wasn't as bad as I expected. Maybe my standards have slipped but I don't think it's that. It's because here were things that without this text were completely lost to my mind. It's a museum of me.

I now have a collection of used books, some of which I signed and numbered in 2004. They found their way to charity shops and thence to World of Books and that's fine. One of them is actually pristine, from a bookshop I imagine, as a few did go to real bookshops in the US & UK.

I'm still not happy with the ending, general restrained flow or anyway a lack of plenitude, underwriting, typo "alter" for "altar". But then I've noticed numerous typos in famous bestselling books since then and love it when I spot them so, again, - relief.

I used to complain to my friend at the publisher (Pretend Genius) that the book should never have been published, but now I think I should say an overdue thank you to them and that, after all, it wasn't so bad. I'm even thinking about a new edition, or rehabilitating parts of it, only I'd like to finish other things I've started since then first.

By the corner house there used to be
Shrubbery and a recumbent tree
Where small birds liked to play.
Now there's a block-paved yard,
A useless space for man or bird
But the landlord likes it that way.
Posted by Ossian at 12:49 pm No comments: 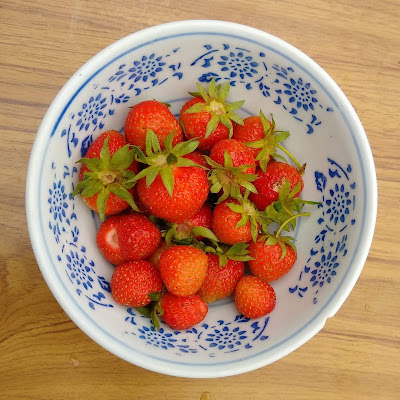 We have a strawberry patch out the back in a raised bed and it produces this sort of harvest every two or three days at this time of year.